Design for easy to build one system Chess Computer

The goal of this new project is to build a fully functioning Wooden chess computer (Like a Mephisto Exclusive) similar to the one described in this site, but in a simpler way and in a way that others can copy. It is important that the design produces a wooden board that is nice to look at and use.

You will see from the Recent Builds page. That Fernando has got this design working.

Since I first built this project the Raspberry Pi environment has exploded and many new bits of hardware and software modules have been developed. The net result is that it is now easier to build a system using just the Raspberry Pi (without an Arduino) and the alternatives to the Pi such as the Beaglebone Black make no sense. The arrival of the Pi Zero for $5 strengthens the case.

My original design had assumed I could use a single I2c bus and hang all devices off that. It turns out that while it is logically possible to connect a very large number of devices to the Raspberry Pi via I2c, It is not electrically straight forward. Many I2c devices are supplied on breakout boards with built in resistors, and devices may run at either 3v or 5v.

The 5v devices usually run displays. The net result of all of this is that in  practice you can only directly connect 3 devices reliably without carefully balancing voltages and separating out devices with different voltages.

I found that with the device mix need for this project that I  got intermittent failures because of the load place on the bus if  4 or more devices are attached. So the noughts and crosses project worked fine, but this chess project requires a slight adjustment.

The solution, is to connect a TCA9548A  I2C multiplexer to the PI and then connect up to 8 devices to the multiplexer.  This gives you 8  I2c channels to which each component is connected.  All that is required is a small change to the original software. I am building this variation now and will include more detail when its done and tested.

I have now tested the TCA9548A  I2C multiplexer with all devices and it works well and simply. You connect the mux as if it were a 3v I2c device using 3v, Gnd, SDA and SCL.

On the output side, you connect each device to its own 3v or 5v supply, plus GND and then connect its SDA & SDL leads to whichever of the 8 channels you choose. ( 0 to 7)

You start your code with these lines to set up the mux:

Then before each device you tell it which <12_channel> 0 to 7 to use by using:

Importantly you don’t change the I2C address of any of your devices from what they were before, except where they might clash with the MUX, in my case no “0x71” allowed.

The great advantage of this device is that:

The only exception to this good news is the Sain Smart I2C  LED  LCD with  Keypad that I used for the noughts and croses project. Unfortunately the Adafruit library it uses seems to have hard coded bus routines in it and I cannot figure how to edit it. I have also decided I want a bigger screen so I am going for an I2c 4×20 Character LCD, which I have tested with the mux and it works, plus another MCP23017 for the four buttons I need.

My next step is the final assembly of all this, however I am off for a month or so soon, so it may take a while before I get around to it. 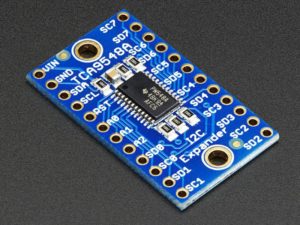 My new design uses the I2c bus. This means that it connects to the Raspberry PI using just 4 wires. It consists of these elements

Another advantage of this design is cost. The total cost of all the electronic components is shown below. All except the Pi, sourced on Ebay, mainly from China, more expensive if bought locally.

I will put up more details of the build later, but the connection each of the components above is well documented on the web.This does not include the cost of the chessboard & pieces.

** I used to list the generic  HT16K33  board, but I had problems with it. So I think it better to use the Adafruit 16×8 LED Matrix Driver Backpack – HT16K33 Breakout, particularly as they have written the driver for it.

The software for each component is broadly the same as described elsewhere on this site and I have got all the components working separately. I am currently working on finishing the hardware build. Whatever way you design it there are still 64 reed switches and 64 LEDs to solder in place.

Controlling the Reed Switches is here

Controlling the LEDs can be done with the Adafruit 16×8 LED Matrix Driver Backpack – HT16K33 Breakout it has its own library, which makes programming in Python very easy.

Software that uses the MUX

All the hardware elements work together and have now been tested. I am now in the process of completing the physical build and will then modify the chess software for the PI only build.

In the next few weeks I will publish test software for these Mux elements, but as a taster here are two test programs. Both use the Mux. One tests the 4 MCPS by  printing to the monitor the state of a chess board switches  eg A1 Open or E4 Close. The other does the same thing, but also turns on and off the corresponding LED using  the HT16K33

I have described elsewhere the basic approach to building my first chessboard. Here are some further topics on the subject including a welcome contribution from Brian.

First connect the TCA9548A I2C multiplexer: directly to the PI as if it were a 3v I2c device using 3v, Gnd, SDA and SCL.

You should see one device connected with address x71.

You will see that the MUX board has 8 channels labelled 0 to 7. Each channel is a pair of SDA and SDL connections.

Our Connections will be:

Now connect each of the 4 MCP23017 s to one of the channels by wiring the SDA & SDL leads to the Mux connection as shown in the table above. ie One MCP to one channel. Connect the power and Gnd cable to the 3v and Gnd pins on the PI.

Configure the MCPs to the correct I2C address from the table. see the NOX page for how to configure I2c Addresses.

I suggest you do one MCP at a time, or at least just do one to start with. You can modify the test code in MuxMaxAllMCPV2.py.  There are two loops for the MCP, one for set-up and the other for scanning. of the form

Change that so for the first MCP it reads i=0  and k=0  (i and k are not the channel numbers, you will see that the program adds “2” to each)

The I2C signal is switched through the mux by the program to the correct channel preserving the I2C address of the device so that the device recognizes the call. As all the MCPs are on different channels we could have given them all the same address, but I made them different so you can test without the Mux if you want to and for clarity.