Building The Chess Board

To build the chess computer I needed a good quality chess board that was about 6mm thick to allow the magnets to trigger the reed switches. All the good quality boards I could find were much thicker, so I decided to build my own.

The design involved fixing wood veneer to 6mm MDF board.

I found that you could buy 50mm wide wood venner strip on Ebay: 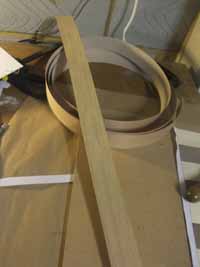 To start I attached 4 strips of light wood and 5 strips of dark wood to stiff paper in alternate strips. 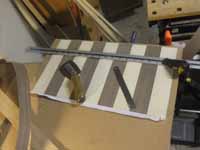 Then I cut the resulting rectangle in 50mm strips at right angles to the veneer to produce new strips of 50mm squares. 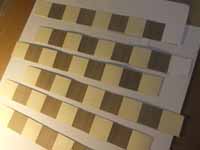 Arduino Chess board strip of squares

Then by off-setting alternate strips I created a chess board, which I could trim to the right number of squares and fix to the 6mm MDF. The square of MDF was 500mm x 500mm to allow for 8×8 50mm squares and a 50mm boarder all round.

I found that adding a thin strip of edging around the 8×8 squares before the border gave the best effect. I then treated the chess board with a good quality clear sealant.

The finished chess board: 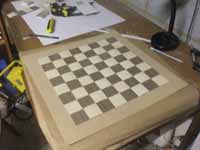 Next I drilled 5mm holes in the corner of each square to hold the LEDs.

I then wired these up in a matrix effect. I used 8 strand ribbon cable glued to the underside of the board and used an old soldering iron bit to burn off the insulation where the LEDs were to be soldered. Note that the LEDs must all be attached the same way round.The Reed switches were first glued in place on the underside of the board and then soldered at one end with a common earth, and the other end directly to the strands of 20 strand ribbon cable (16 connections, 2 common earth and 2 unused) the other end of this cable plugged directly into the Centepede card.

Note on positioning of reed switches. To position the reed switches you will first need to draw the chess square positions accuaretly on the underside of the board. The reed switches need to be placed in an off-set position so that one glass end of the Reed switch is at the centre of the square. Experiment with a test margnet to get this right or you will find the chess pieces are not recognised correctly. 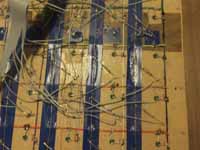 Arduino chess board wired with LEDs and reed switches

Finnaly on top of this mass of wires I fixed another thin board on battons. The wires from the LEDs and Reed switchs came round and fixed onto theMatrix controller and Centepede board respectively. 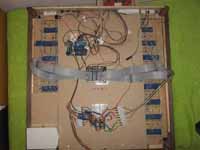 The Matrix LED controller and the Centepede then conected to the Arduino that also had connections for the display and 4 buttons which were added later.

9 Responses to Building The Chess Board