On this page I feature some recent chess machine builds. To be included just leave a comment on the main page, ideally with a video and I will add you to the role of honour. Apologies to those who have built one in the past, to be included just add a new comment.

Fernando built his chess computer using exactly the Pi only architecture  recommended on this site as well as the same components. He solved some of the reliability issues with much better quality Reed switches. He says: “The first ones, the glass was breaking at the corners. I replaced them with plastic ones. Also, I used stronger magnets under the chess pieces and add the reed switches on the surface of the board for better contact. Finally, I added a start button which needs to be pushed before making the move to the engine, which helps to reset any issues before the move is sent to the engine. All these changes really helped to reduce the faulty reading.”

And here is the FEZUL code. Note this a .doc file, you will need to change the extension to .py to use it as Python program. python-chess_led_reed

Excellent project and I am glad Fernando was able to get the new design to work!

Wal has used the classic Arduino + Rpi with direct reed switch connections for this great build:

Wal says : “thanks for inspiring me to have a go at this project. I decided to give it a go just over two months back, and have got the machine to a workable state now, albeit still rough. I’ve uploaded a video of the box to YouTube here: https://www.youtube.com/watch?v=n7CTtXflS9c

I managed to get it working with FEN based notation, and came across some of the same problems you did with multiple MCP23017s – interrupt wouldn’t work with more than 3 connected, as far as I could tell. I still have a lot of tidying up to do, but for now it works – it’s certainly better than me at chess!”

Marcello from Chile makes his own sensors!

Thank you very much for this fabulous project. I finished my built with your excellent instructions and following the learning curve suggested from tic-tac-toe game to chess board.

Currently i’m using my cell phone (vnc connection to pi desktop) to start the software in the pi, the board screen is not finished yet.

For magnetic sensors, I tried reed switches but quality and accuracy was not good, then I made my own switch very simple with a cooper lamina and magnet attached.

The most tough part was the interface between stockfish and the board, but your noughts and crosses game code helped a lot.

A shot of the wiring: 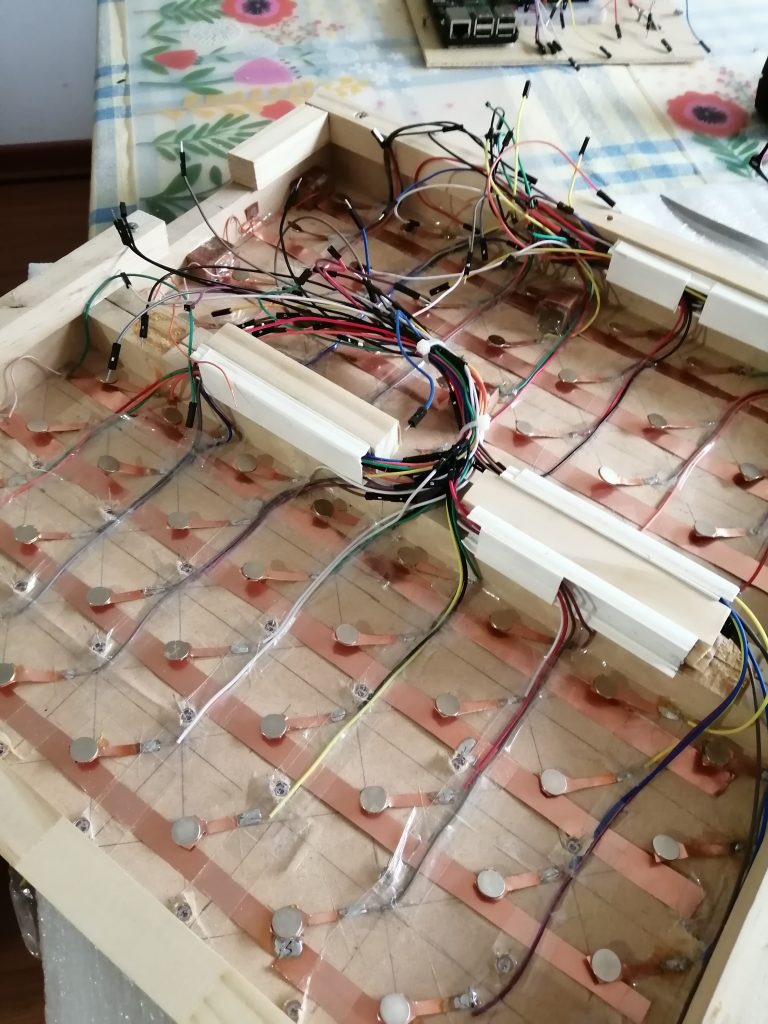 I just finished the NOX project and it is up and running. Thanks for your detail explanations and recommendations. This was my first project with electronics and microcomputers. I used the same components as you listed below and step-by-step procedure. The main issued I had to deal with was that the python_led_backpack and adafruit_python_charLCD libraries are no longer valid and the new ones do not work on python2 which is no longer supported. Therefore, I had to modify your code slightly to accommodate the new libraries and update the code for python3.